Eddie Guerrero was a hero of mine. I was fortunate enough to work with him many times, and he helped me more then I could ever put into words.
Eddie was my friend. He still is. Maybe i'll be back on here to tell some stories when I clear my head, right now is just too hard.

I find it so hilarious that people not only read what I write here, but openly debate what "cryptic" things I write and the "meaning" behind them. There's a lot of over active imaginations out there, and they usually come in the form of somebody that thinks they know the business because they bought a few wrestling dvds. If you don't like what I write here, don't read it. Chances are if it's "cryptic", and i'm tired because i've been up for over 24hrs, it's just mindless drivel. Trust me, that last entry wasn't written for anybody to understand, it was just in my head and I posted it. I don't even understand it. It's not a coded message for "help, i'm unhappy!", because honestly i'm the happiest kid on the planet right now.

Sometimes i'm angry at the world, sometimes i'd like to punch a lot of people, but i'm LEARNING! (ho ho! the punker must not be happy!)

"everyday above ground is a good day..."

Not for me, but for where I was a year ago.
Sing for where i'll be a year from now. Sing for all the people that wish they didn't have it coming.
You know you're in trouble, and I know i'll be singing.
Top of my lungs...."This ones twenty eyes!!!!!!!"

"Refuse to be denied. Refuse to compromise...I raise my fist"

Say goodbye to your teeth.

Harley Race, eight time NWA World Heavyweight Champion and Hall of Famer, was the guest on In Your Head Wrestling Radio this past Wednesday. When ask which young wrestler today he would like to wrestle, Race said either CM Punk or Trevor Murdoch. Calling Punk and Murdoch "fantastic young guys," Race went on to compare Punk to Shawn Michaels, saying Punk's "as gifted as Shawn Michaels was in his time." When ask if he thought Punk would succeed in WWE, Race said yes, if WWE doesn't throw any roadblocks in his way. He conceded that Punk's size will work against him in WWE, but pointed out that Michaels had the same problem and overcame it. If Punk's given an opportunity, Race said, "they'll see his work is so good and they'll forget the size thing."

09.02.2005 - FAREWELL SHOW - Halloween 2005
On Halloween night in San Diego, Rocket from the Crypt will be playing our farewell show. After 16 years of scars and ear damage all in the name of spreading goodwill and the Rock N Roll doctrine, we will take the stage for the last time on our favorite day of the year. We know that it is very difficult for those around the world to be with us for this celebration, but we invite all that have been a part of this awesome ride to come out one more time and give it up for the band. We will offer those that have supported and fueled us the first opportunity to purchase tickets. The show is taking place in a hotel ballroom and room packages will be offered with the tickets if you desire. There is a limited number of these discounted room/ticket packages available. There will be five ticket options. 1. Ticket only, 2. Room with 1 ticket, 3. Room with 2 tickets, 4. Room with 3 tickets, 5. Room with 4 tickets. The show is unfortunately 21 and up only as there will be rampant live!r-defying consumption. The rest of the info is below.


It's been a rough year. I just got floored with this announcement. It's already sold out. Fuck.
My dancing shoes will be set on fire, and I will dance no more. Fuck. Here's to the greatest straight up rock 'n roll band of my generation that nobody knows about. I'm trying to find a way to get to San Diego, chances are slim and hearts are heavy. There's a hole where my heart used to be, it's been a rough year.

Elijah Burke says I say "fuck" a lot. I do. I really really do. I don't think it's a bad thing at all.
I want a shirt that just says "fuck you" on it, and I want to wear it while walking through airports all day. There's no such thing as a bad word, just bad intentions.

I'm going to the zoo tomorrow. Or later today due to what time it is. I should really be asleep. Chances are I don't set my alarm, wake up way late, throw things due to waking up way late, skip doing legs and just do an hour of cardio, then either A. go to the zoo for maybe two hours, or B. hang out at the sushi bar all day and drown my sorrow in rice and edemame.

I can't seem to go to the movies without getting popcorn. And it never fails when I ask for a medium, then tell me how much money i'll save, or what the small amount is to upgrade to a large, and then look at me like i'm crazy when I tell them if I wanted a FUCKING (there it is again!) large I would've asked for one. Run on sentences rule. AND so does starting sentences with and. I recently saw Domino and Corpse Bride. I liked both, but maybe they're renters. Maybe.

There's a very large cemetary near by that I think i'm going to spend some time in soon. Cardio in the cemetary! Nothin' can beat it.

Go check out my "ask Punker" stuff on my website (cmpunk.com) for answers to questions I get asked all too often. There's maybe....two interesting questions asked out of fifty so far. Nobody is challenging anymore, and everybody thinks they're as funny as me. That's right, i said it. You should see some of the questions I don't bother answering....

It's hilarious to me how I work out like crazy, super hard everyday, STILL think i'm fat, and yet am too lazy to spell check this. It's also ironic when you consider one of my pet peeves is the fact that nobody knows how to spell anymore, OR use proper punctuation. Don't even get me started on the people that use number for letters....fuckin' hell ya'll, i'm going to snap very shortly.

Pygmy hippos and a 12 foot albino alligator here I come!

So James Gibson walks into the FIP locker room and he's all geared up to tear the house down. Only one problem: There's only about 12 people in attendance. On top of that, i'm the "memphis" in the "memphis-strongstyle" world of the FIP. Gibson apologizes to me for not being familiar with everything I do, but knows I throw a shinning wizard, and keeps trying to put that in the match. I'm not one to take the night off, so i'm trying to assure him that's not what i'm trying to do. I tell him no wizards tonight. No trolls, no spooky witches, and no huge moves. I'm MEMPHIS tonight. He thinks i'm crazy, afterall, this is the indies right? We're supposed to dump each other on our heads a whole lot, then maybe punch eachother in the face a couple dozen times. James Gibson is kind enough to let me call the match in the ring, like the heels always used to, and something great happens after. James Gibson walks in the back and tells ME, CM Punk, that i'm a hell of a worker.

I think back on that story a lot and smile. To me, I ain't nobody. He was Jamie Noble. I'm just some punk rock kid trying to tell stories. Instead of talking spots for two hours before our match, he talked about his kid, and I started to get to know the guy. I think he really loved that. Man he really loves that kid too. I thought it was the most bad ass thing in the world. He was really amped to work with me, and I like to think afterwards he had a totally different apreciation of who I was, and what I was capable of. In between asking me if I offend him because he likes drinking beer and telling stories about his kid, he thanks ME for taking care of him and making it fun again for him. Jamie Noble. James Gibson. Thanking ME.

James Gibson leaves ROH tonight, just like I did almost two months ago. I wish I could say I was going to be there, but i'll be wrestling a house show in Indianapolis. He deserves one hell of a send off. He helped ROH out more than I think he knows. In the grand scheme of things, he's been there for me in the short while i've known him, but I think back to that first day we met, and worked, and hung out...and i'm greatful that I can call James "by god" Gibson my friend. He's my little buddy, don't ya know!

Somebody better throw some streamers for that hillbilly. Throw a couple for me too, and yell "armadilla!" at him a few times, just so he thinks of a certain punk rock kid...

It's officially fall. It's almost October.
You may recall October is my month. That's right, i'm Mr. October. I see no reason for this year to be different.
I'm medically cleared as of Wednesday to get back in the ring, after everybody made a pretty big deal out of what in my opinion was nothing. simply another broken nose, first time bone has actually stuck out though, that was interesting. The ear thing is worse, but if Corino can survive, it's a cake walk! Plus, it's sorta fun really not having to listen to everybody most of the time and having a legit excuse. I'm sure the novely of being half deaf will wear off eventually, but let's face it folks, when it comes to injuries, i've had worse...

"If it doesn't kill you, use it and kill somebody else..."

Rohs three kings. And don't you fucking forget it. Ever. 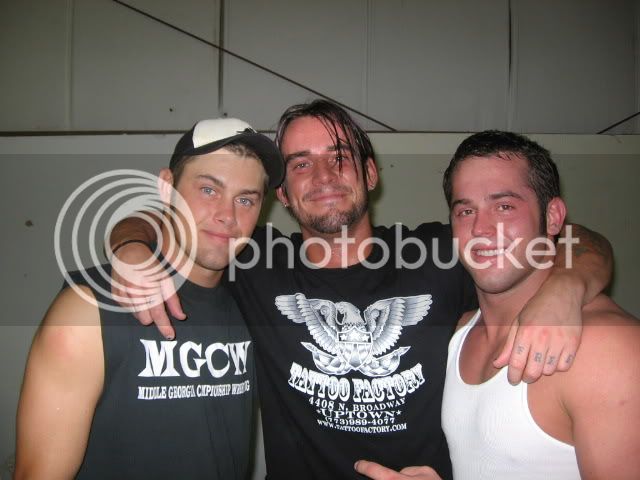 Insomnia rages. No time for words, this is all you get: